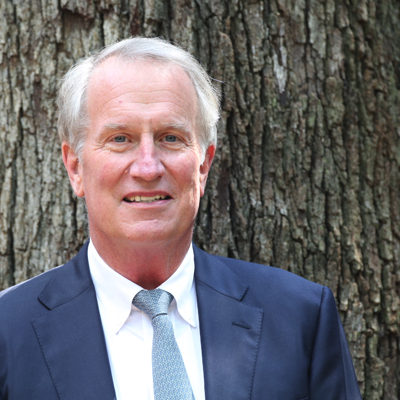 
Mike was a founding partner of the firm and much beloved by his family and his colleagues throughout the legal community. Mike loved the practice of law and those of us that occasionally worked on weekends were sure to find Mike studying recent court opinions and lobbing dry, one-liners at us as we passed by his office.  But Mike’s first love were his children, Cate and Andy—a deep love that he simply could not contain whenever he spoke about them.

Mike attended law school at the University of Texas at Austin and was a huge Longhorn fan.  Mike was also a gifted athlete and, in law school, he was a member of the Legal Eagles, the law school’s intramural football team coached by the legendary UT law professor, Charles Alan Wright, with whom Mike bonded.  They were life-long friends.

Mike had a distinguished legal career which he began as counsel to the Texas Senate Natural Resources Committee, later serving as counsel to Texas Railroad Commissioner John Poerner.  In 1982, Mike formed the firm with his law school buddy, Brian Sullivan, a partnership that spanned four decades.

Mike has been described as a “lion” of Texas oil and gas law having litigated several important cases including HECI v. Neel, Browning Oil v. Luecke, and Railroad Commission  v. Arco, just to name a few.

We all miss Mike but his was a life well lived.

Trial counsel and co-appellate counsel for HECI in reversing a Court of Appeals decision which would have exposed operator to multi-million dollar claim which was barred by limitations/discovery rule.

Lead trial counsel and co-appellate counsel for Defendants, Anadarko Petroleum Corporation and Chevron Texaco, involving adverse possession of oil and gas leases. The Court of Appeals affirmed the trial court judgment in favor of defendants, holding that plaintiffs’ claims were barred by limitations and adverse possession.

Lead trial and co-appellate counsel for Browning concerning allocation of production to royalty owners from a horizontal wellbore located on both pooled and unpooled tracts of land.

Conventional Thinking Will Not Work in Unconventional Reservoirs: Will Texas Be Forced to Relive the Years Preceding the Conservation Movement of 100 Years Ago?  S. Texas College of Law Energy Law Institute, September 1, 2010